Understanding the gestation of different animals is not only a matter of research, but also an art.

When it comes to gestation in dogs, which we’re going to look at in detail here, we base our research on how long dogs that we keep as pets in our home are pregnant for.

In this article, we’ll ensure that we get an idea of all the aspects involved in dogs’ gestation, including the number of months the pregnancy lasts, the stages of the reproductive cycle, and pregnancy signs to look out for.

The pedestrian meaning of gestation simply refers to the time covered during the pregnancy period of an animal.

Gestation is normal for mammals, but certain non-mammals can sometimes go through it. It may be a single or a twin gestation, depending on the number of embryos or fetuses carried within viviparous organisms.

The Stages Of The Reproductive Cycle

This is the first stage of the reproductive cycle in dogs and it usually takes around nine days.

In this stage, female dogs tend to attract male dogs, though mating might not take place until the second stage. The swelling of the vulva and discharging of blood are signs that indicate that a particular dog is going through proestrus.

The estrus stage has no distinct time period — it can last 3-4 days and it can also last between 7-11 days.

During this stage, the vulva tend to get larger. The bloody discharge starts to decrease in amount, become more watery, and change to a pinkish-red colour.

This is actually the final stage of reproduction. It occurs around the fourteenth day and lasts around 60-90 days.

The discharge gets redder in color and the size of the vulva returns to normal. Dogs do not permit mating at this stage and tend to shy away from their male mates.

After doing away with all the swelling and discharge, dogs reach the end of their heat period.

After the heat cycle, dogs enter the nonbreeding phase. From this point on, they will be prone to the next heat cycle after they have conceived as a result of any pregnancies.

Anestrus is basically the period between one heat cycle and another, and it’s usually estimated to take around six months depending on the breed of the dog.

How long are dogs pregnant for?

The average pregnancy, or gestation, of dogs tends to last around two months.

Breaking up each individual stage of gestation and summing the days, we can estimate the pregnancy of dogs to be between 58-68 days, but this depends on the breed.

The length of a dog’s pregnancy can also be given a much more exact time frame based on which reproductive hormones are present.

When dogs are going through gestation, they will tend to change their behaviour and feeding habits. Let’s take a look at some of the most common signs of gestation in dogs:

A pregnant dog eats differently depending on its stage of gestation. It can vomit and eat less at the early stage but will often begin eating more at the final stage.

This indication is not common for all types of dogs and depends largely on the breed.

When a dog is pregnant, it tends to behave in two distinct ways:

Dogs can display other types of behaviours during pregnancy, but these tend to be the most common.

3. A Change In Energy Levels

Pregnant dogs tend to get tired much more easily than if they weren’t pregnant.

The decrease in activity can be very noticeable with dogs that are normally energetic. Otherwise, take note of your dog’s energy while it goes through its daily routine.

4. Changes In The Appearance Of The Nipples

The nipples of a dog are usually small, but they tend to increase in size and charge colour when a dog is pregnant.

During the final stage of gestation, the nipples tend to leak milk to indicate the dog’s preparedness to give birth and breastfeed the newborn pups.

Throughout the final stage of pregnancy, a dog will often begin to build a nest for her newborns using scraps and other material she can find.

At this time, the owner should ensure that children do not disturb the dog as she can be irritable.

With continued time in gestation, we should expect that the puppies inside the dog also have grown. This growth leads to an increase in weight and an enlargement of the abdomen.

Watch this video on how to tell if your dog is pregnant without a pregnancy test:

Owners should also be conscious of other needs of their dog including a good, comfortable rest.

Thanks for reading this article. Is your dog pregnant? Share your experience in the comments below. 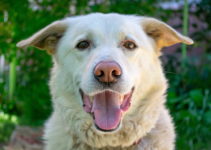 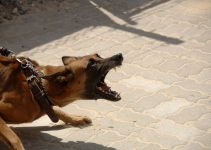 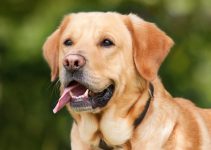